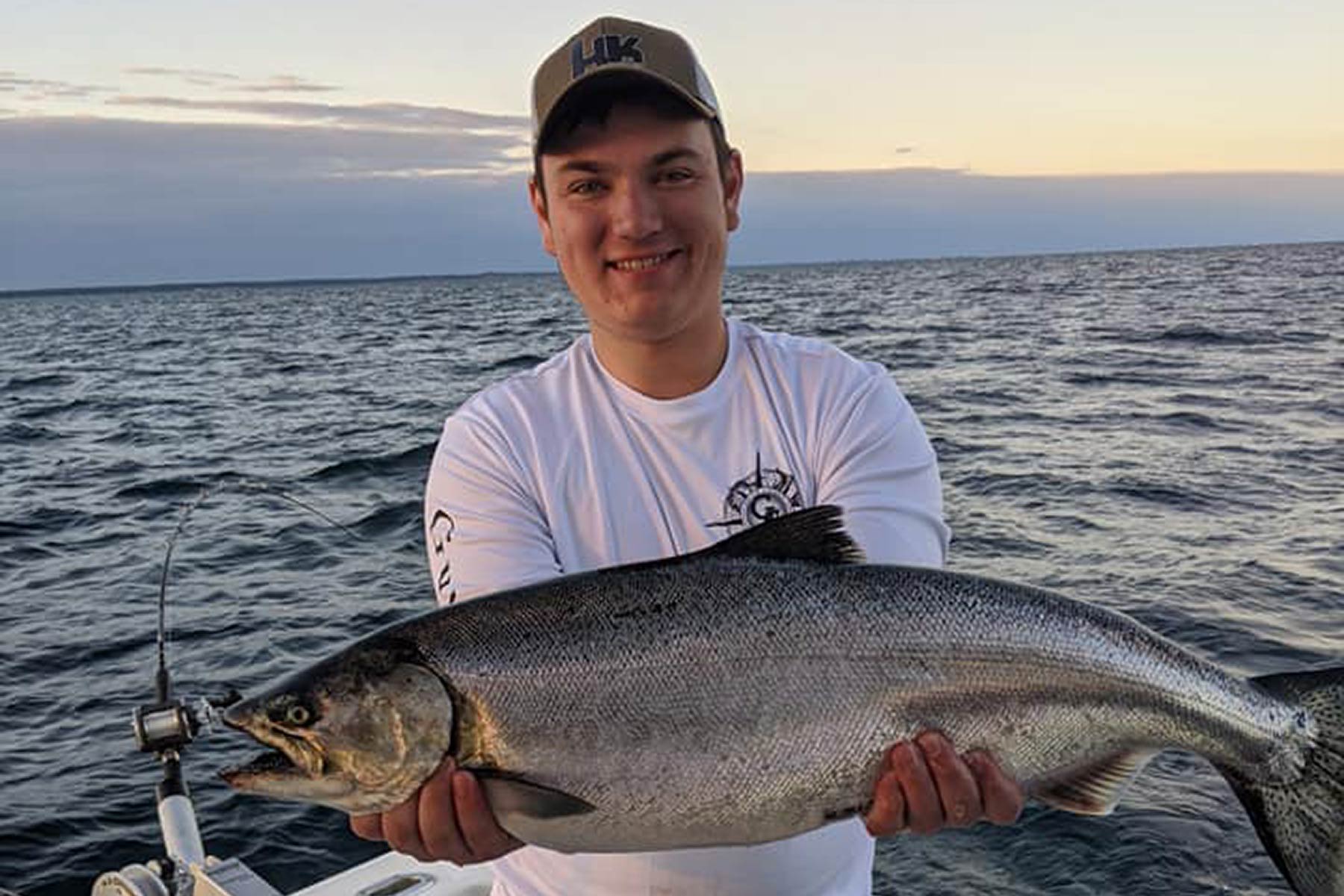 The city of St. Joseph is a long way from central Michigan, but for adventuresome anglers craving fresh salmon, it’s 1,000 miles closer than the Pacific coast. In that sense, chartering a Great Lakes captain for a day of big-water fishing is a value unmatched, and the area just outside the mouth of the St. Joe’s River produces some of Michigan’s hottest early salmon action.

As I quickly discovered, Captain John Milbourne was the right man for the task. Milbourne called me in late April with a smattering of options and I booked on May 7 as a tag along with a couple guys, Lincoln McGhee and Leo Supplee, from the Detroit area. McGhee and Supplee do a fair amount of big-lake fishing up near Mackinac, which, as I thought about it, was somewhat baffling. Why would they pay a guy to take them fishing if they had their own boat and a place on good water? A good question, one that most people taking charter trips overlook after all, the average angler usually hires a fishing guide expecting a full limit of the target species. But most guides will readily admit that this is a short-sighted objective.

For McGhee and Supplee, their mission was more complex than simply boating a few fish. They wanted to enhance their understanding of the entire process. Sure, they sought fish to take home, but they also wanted questions answered, rigging techniques explained, and, in general, to learn from a guy who really knows his stuff. Those objectives fulfilled, they could take to their own waters a more diverse range of tools and techniques for cashing in on what the Great Lakes have to offer.

Milbourne did not disappoint. We left the dock by 6am and had lures in place over 40 feet of water as spring’s great orange sun climbed over the Lake Michigan dunes. Within twenty minutes the first of the day’s salmon, a clean and shimmering silver five-pound king, came to the net. In six hours, from about fifteen good hits, we ended up with nine fish, including one smallish coho and a respectable 15-pound king. And it was a perfect morning to fish: the usually temperamental lake produced nothing more than a gentle rocking action to the boat; at times, the air was cool enough to see our breath, though the shining sun made the trip quite comfortable; all questions were answered, and details explained, with the weight of professionalism; and the fish cooperated.

The fish cooperated, indeed. Therein lies the major snag for those charter guests looking merely to put fish in the cooler. For those of us who spend any amount of time on the water chasing those silly, unforgiving fish, this is something that we all deal with, from the best charter captain in the world to the worm-dunking, popsicle-eating kid on shore. When the fish don’t want to eat, they won’t bite any presentation, regardless of the angler’s name, the kind of boat he drives, and how many patches he has on his shirt.

Summary: When you contemplate hiring a charter captain or guide, do so with higher expectations. Expect to catch some fish, but realize that limiting out is something even the best anglers do only when the stars align perfectly. Strive to come away with a better understanding of the process so that you can incorporate specifics into your own style. Best of all, relish the experience. I think McGhee and Supplee enjoyed the simple course of being on the water that promising spring day, away from the land and the crowds and all of life’s triviality, as much as anything.

Would I book with Captain John again? Absolutely. I’ve been on a fair share of guided trips, and spent some time guiding anglers myself, so I speak with some authority. The most compelling thing about him is that he takes a long-term approach to business, that is, he aims to please. Short-term captains resort to making bad decisions for their guests, namely, by taking them out when conditions are unfavorable for a pleasant trip. Wind is the main culprit of ruined charter fishing. Wind and the ensuing waves hinders control of lure speed, decreases the chances for good hook-ups on biters, and facilitates early and constant vomiting.

Captain John has no qualms about calling it quits before the boat leaves the dock. Regardless of whether he’s chasing June walleyes on Lake Erie or late-summer kings out of Manistee, he’s in it for the long run, which makes him a valuable asset, on multiple levels, for any angler wishing to tangle with Michigan’s big-water inhabitants. 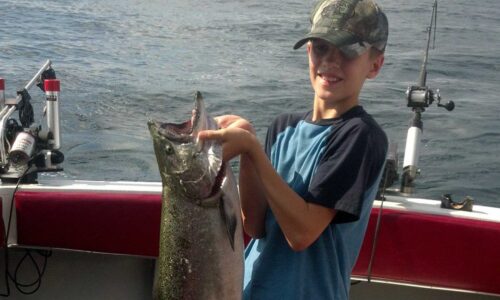 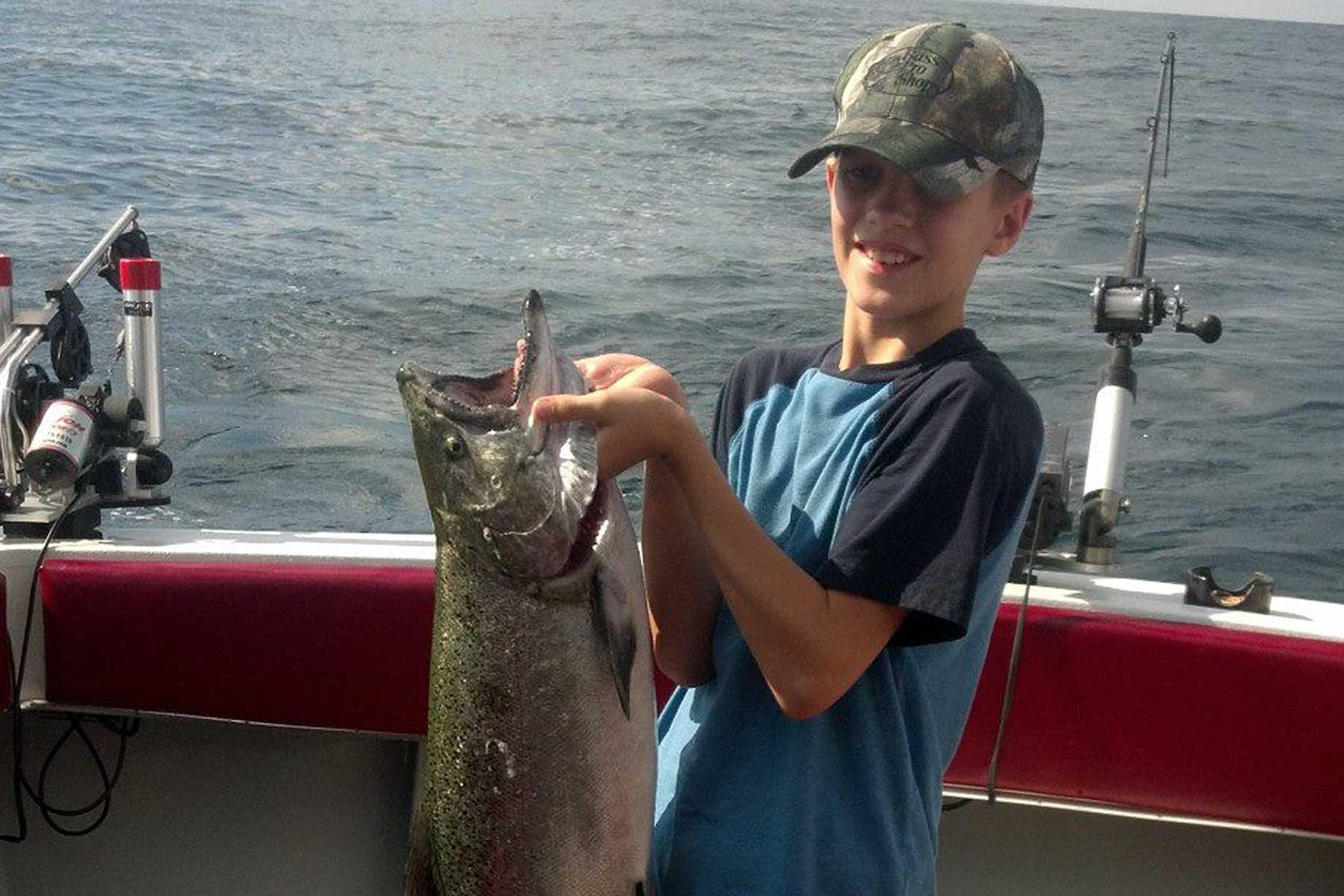